Two years ago I first hiked the Kreuzspitze. The Kreuzspitze in Ötztal Alps – kreu means cross in German and spitze could be translated as peak and as there’s a lot of peaks in (not only) Alps with cross on top, it’s also bunch of peaks with same name in Austria, Italy, Germany and maybe somewhere else. The trail from closest village Vent is not extra difficult (you don’t need to climb) although it’s steep in some sections and the final part being a bit exposed ridge. Later I discovered the concept of FKTs or Fastest Known Times and after a while it clicked me. This could be a great peak to try to summit (and get back down) in record time.

The idea was in my head until last week. I packed basically my shoes and head Vent with option to try set FKT on Kreuzspitze. In this case it will be also First Known Time (pun intended) as my research felt short on discovering some time for ascent and descent.

September 29th (2014) looked pretty good and after a breakfast I started running. To make it somewhat comparable for the future I decided to not cut any switchbacks and follow completely the marking (if you know exactly where you’re heading I believe you can run slightly shorter though steeper, direct, path). I started in front of log cabin, on a fork of Marzellweg and Spiegelbachweg.

It didn’t started the best as I had to retie my shoes after like 8 minutes and few minutes after followed by emptying other shoe because a small grit was inside. I reached Martin-Busch-Hütte 1h06min elapsed and the real way up started. 2h18min elapsed I reached the peak of 3457 m (11,342 ft.). Taking a picture (actually a few) as another proof in case my watch will fail and I was ready to start descending (2h21min elapsed). This part was bit tricky because the marking, which I decided to strictly follow before, is mostly facing down for hikers going up. Back around Martin-Busch-Hütte in 3h01min elapsed and finally back where I started 3h39min on a clock. For a moment I was contemplating sneaking under 3h30min. Maybe another day.

As I haven’t discovered any other time I believe this is a first and currently fastest known time (FKT and FKT 😉).

Here’s the link to Strava.

Few images I snapped on top before running down. 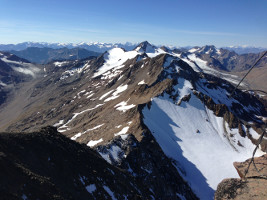 Jiří Činčura is .NET, C# and Firebird expert. He's focused on data and business layers, language constructs, parallelism, databases and performance. He's Microsoft Most Valuable Professional and frequent speaker. You can read his articles, guides and tips and tricks at www.tabsoverspaces.com.