Let me first clear, that the same applies to using var, I’m just going to use await using var, because that’s what I’m actually working with.

I always thought about the await using var as a shortcut. Shortcut in a sense that the pieces of code following are simply in { and } where the closing } would be at the of the method (or before other } from pieces of code above). And from a point of basic understanding how the code is going to behave that’s absolutely fine and correct. But when dealing with syntax trees, the story is different. Very different.

The code above is UsingStatementSyntax node and has an AwaitKeyword. So far so good. 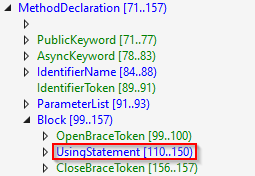 Yet this code is completely different story. This is a LocalDeclarationStatementSyntax, again with an AwaitKeyword and also with an UsingKeyword. Unexpected. Yes. At least it surprised me the first time. When you think about it obviously makes sense. It was just, …, unexpected. 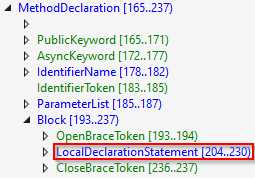 And now you know. But unless you deal with syntax trees, Roslyn and analyzers and/or code fixes, well, I don’t know if this has any value.

Jiří Činčura is an independent developer, .NET, C# and Firebird expert, focusing on data and business layers, language constructs, parallelism, databases and performance. He's Microsoft Most Valuable Professional and frequent speaker. You can read his articles, guides and tips and tricks at www.tabsoverspaces.com.